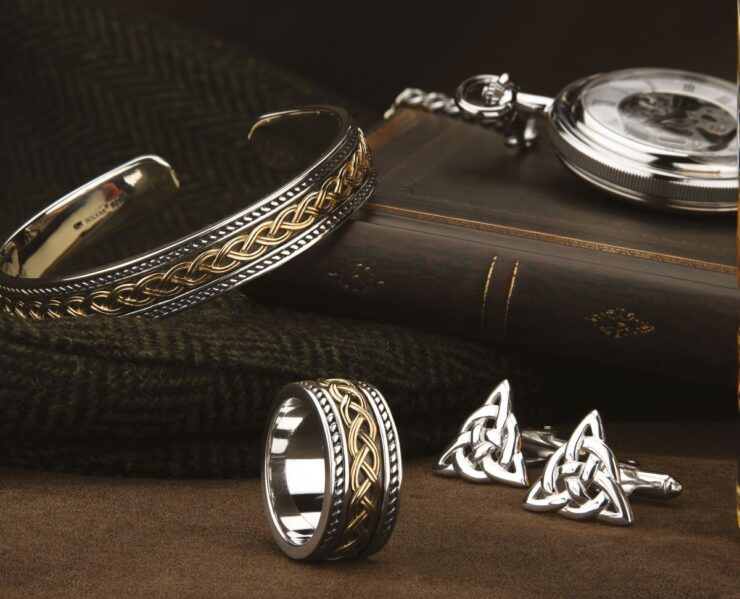 The origins of Celtic Jewelry actually date back to between 2000 BC to around 550 AD. In that period Celtic craftsmen started to create jewelry using silver and gold. What differentiates Celtic jewelry from any other is the fact that they created special Celtic symbols which amaze people even today.

Even though the time has changed as well as the process of creating and refining Celtic jewelry, the thing that remains is the memory of ancient Celtic symbols that people can learn about. Todays’ Celtic jewelry is a combination of modern design and Celtic history. Therefore, even though the styles have been changed, the significance of why charming Irish Celtic Jewelry is so highly valuable, worth, and admired throughout the world is something that remained.

Beautiful Celtic Jewelry Designs are very specific in every term, and the range of available styles today is highly wide, so everyone who is a fan of Celtic authentic bracelets, earning, rings, can find them on celticminkjewelry.com

Let’s Find Out More About the Celts

Tracing the roots of Celtic jewelry will bring us back to Ireland’s earliest stone carvings. The ancestor Celtic artwork is inspiring designers of jewelry even nowadays. Celtic special concentric circles and swirls are developed in the form of Celtic knotwork, while the Celtic focus of nature evolved in different trees of lives and shamrock motifs.

When it comes to history, Celtic jewelry primarily appeared in the early Bronze Age when people found a way to develop special tools and skills that can help them to shape metal, bronze, gold, and silver. They were very focused on decorative engraved patterns. This is clear proof of how Celtic was very committed and amazed by the details of the pragmatic items and they really put a huge effort into being creative. They truly did not want to miss an opportunity to add beauty to their everyday life.

Authentically Celtic Simplicity Made a Statement

The jewelry that people wear today is completely different from the Celtic one. However, people still wear meaningful symbols of Celtic history on their jewelry pieces. Always, Celts found symbols very important and the jewelry represented to them the importance of love, faith, and family. This is the main thing you need to know if you want to understand the Celtic symbols.

The jewelry is not just a piece of metal they were wearing. Instead, it brought some deeper meaning to their lives. All those beautiful symbols you can notice on Celtic jewelry are special motifs with a meaning beyond simplicity. Their jewelry design truly leaves a statement. If you want to understand Celtic symbols, continue reading this article. In that way, you will know what piece of Celtic jewelry you should choose to wear.

What Are the Most Important Celtic Symbols Used in Modern Celtic Jewelry?

Let’s find out which symbols were the most significant to the Celts. You probably saw that there are so many of them, and this is just proof of how creative they were.

The most popular Celtic symbol s the vibrant green plant. If you are not familiar with the store, St. Patrick was using leaves of the plant to explain to Irish people how the Christian Trinity of the Father, Son, and Holy Spirit was both three and one at the same time.

The magnificence of such a simple symbol provides a wide range of different designs for different purposes. When it is St.Patrick’s Day, which is Ireland’s national holiday, Irish people are wearing the symbol on their wardrobe, jewelry, etc.

The Tree of Life represents so many different meanings from ancient times to the Celts. In general, people have always considered trees as something incredibly sacred. Celts have a special Brehon Lay legal system that was used for ranking trees. The Three of Life is actually a stylized picture of the tree branches that are scratching and curving in order to meet each other, while the root of the tree is also presented.

This symbol actually represents the circle of life and people consider it as the infinite renewal. What it symbolizes are the stages of life. New leaves are presenting youth, branches are presenting adulthood, while the roots are presenting old age. They are combining and demonstrate the connection between different generations.

There is a special connection between combining knotwork with the number three to the Celts. These symbols are presenting the tripe spirals of Newgrange. More precisely, in a religious context, this symbolizes the Holy Trinity. Additionally, it also means the infinite flow of time. They found a unique and special way to present the unbroken line between the past, present, and future. To the Celts, knots are presenting eternity, since they do not have a beginning or an end. This is the main reason why Celts made wedding rings with this symbol since it represents the commitment of the couples to each other.

If you are wondering what is the most romantic symbol of Celts history, you will find out now. There was a small fishing village in Galway where one designer called Richard Joyce lived. He was captured at sea and put into servitude with a goldsmith in Aerial. When he was there, he created a special and most beautiful ring for the woman that he loved in his village. The hands symbolized friendship, the heart symbolized love, and the crown symbolized loyalty.

After some time, when he finally becomes free, he returned to his village and shows the special Claddagh ring to the woman he was in love with. This ring became very popular and people were amazed by it, so he designed so many of them later.

Celtic crosses have been preserved in places around Ireland that was old for centuries. Their incredible feature is the special circle around the intersecting lines of the cross. This circle has so many different meanings, however, it is mostly called the solar wheel. The circle can symbolize eternity or it can present the sun because Celts tracked the sun’s movements very carefully and patient and celebrated them.

What Affects Cryptocurrency To Go Up And Down?

3 Ways to Tell if Your Tea Is Organic